The fastest luxury class vehicle on the Nordschleife 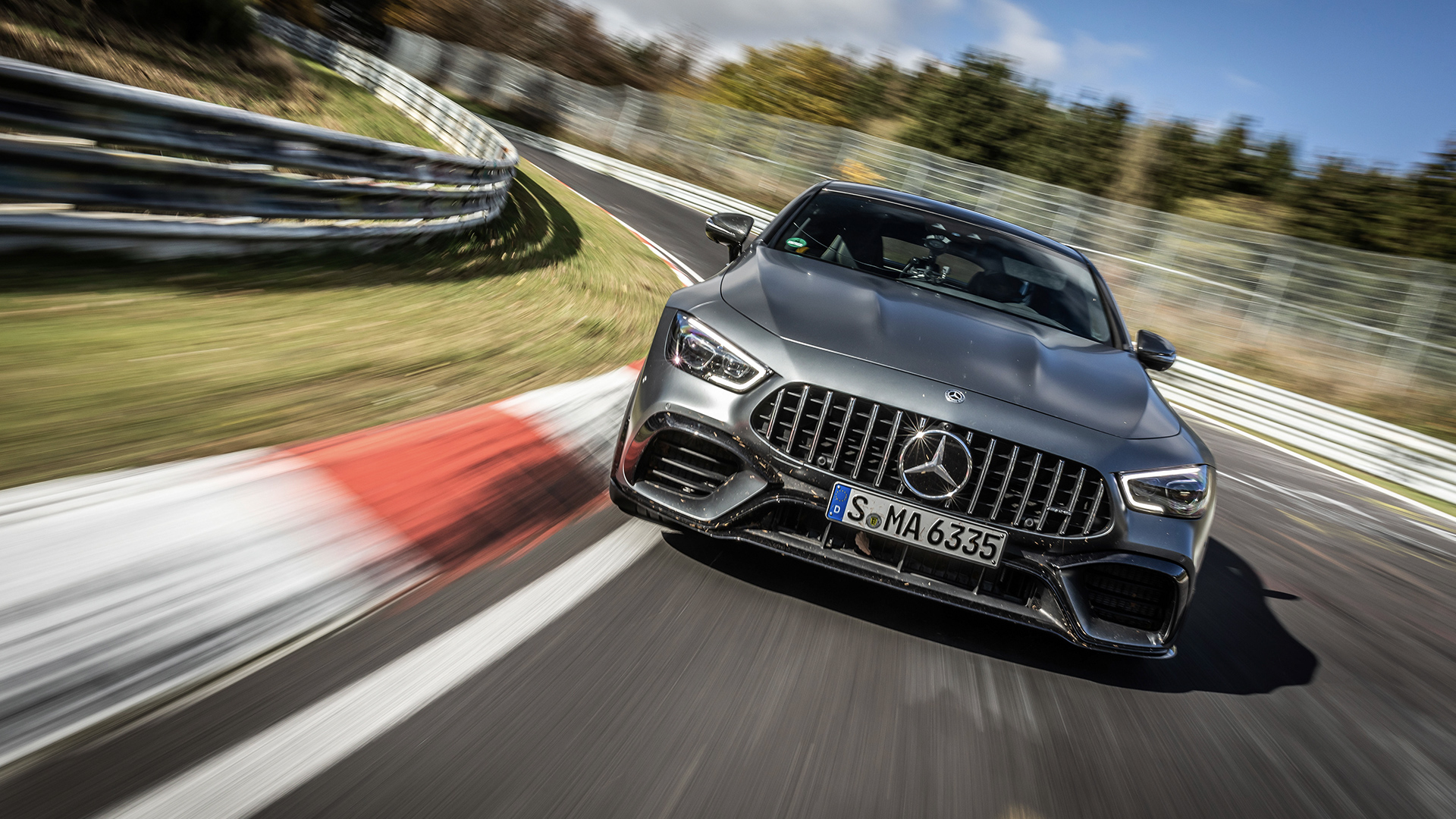 Notarized record round for the four-door coupé from Affalterbach

Affalterbach/Adenau. With the 2021 model year, in production since September 2020, the Mercedes-AMG GT 63 S 4MATIC+ (fuel consumption combined:12.5 l/100 km; CO2 emissions combined: 286 g/km)  is even faster on the legendary Nordschleife of the Nürburgring. Thanks to newly tuned elastokinematics and other fine-tuning measures, AMG development engineer Demian Schaffert set a new record time, putting the four-door coupé from Affalterbach impressively in first place on the official list of best cars in the “luxury class” category. The former racing driver beat his own previous lap record set in the fall of 2018 by 2.3 seconds. The officially measured and notary-certified values are: 7:23,009 min for the 20.6-kilometre-long version (without straight-line measurement for track section T13) and 7:27,800 min for the 20.832-kilometre-long complete track (with straight-line measurement for track section T13). Exactly this variant and this lap time is officially listed by Nürburgring GmbH on their homepage. Mercedes-AMG has thus impressively regained the crown in this class after only three months.

The 470 kW (639 hp) Mercedes-AMG GT 63 S 4MATIC+ looked to set a new record in its completely standard form, and it is outfitted particularly well for this: Its equipment includes dynamic driving highlights such as the fully variable AMG Performance 4MATIC+ all-wheel drive, active rear-axle steering, an electronically controlled rear-axle limited-slip differential and the AMG DYNAMICS agility programme. The Michelin Pilot Sport Cup2 tyres fitted during the record-breaking drive, which every customer can also order as an option, provided the final bit of grip for optimum traction and powerful acceleration out of the total of 73 curves in the “Green Hell”. The aero package, which is also optionally available and mounted on the record-breaking vehicle, also increases stability at higher speeds and reduces the cd value.

“Even though I’ve been accompanying our GT 63 through its development for several years now, it’s always impressive to see the wide spread we have been able to achieve with this exclusive vehicle. This is especially true after the recent slight revision. On the one hand, the four-door coupé is comfortable and equipped with many intelligent safety features for everyday driving, and on the other hand it offers this extremely high level of driving dynamics and precision, which we have now been able to demonstrate once again on the demanding Nordschleife,” said Demian Schaffert.

The conditions on the extremely demanding course in the Eifel were anything but optimal, as some sections of the course even had wet spots. At outside temperatures of seven and asphalt temperatures of ten degrees Celsius, Schaffert made optimum use of the full potential of the top model in the AMG GT four-door vehicle family. In the RACE driving programme, the AMG RIDE CONTROL+ suspension specifically tightens the damper characteristics, and the steering characteristic curve becomes more direct. In the “Master” position, the AMG DYNAMICS agility programme also utilises all the possibilities of the fully variable all-wheel drive system – as well as the rapid-response control of the electronic limited-slip differential – to ensure the highest possible dynamic response. As an additional safety measure for the driver, the vehicle was equipped with a bucket seat and four-point seat belts.

The record lap was precisely measured by the neutral experts of “wige SOLUTIONS”. An independent notary also certified the conditions of the vehicle and the lap time. You can watch the record drive via a video here: 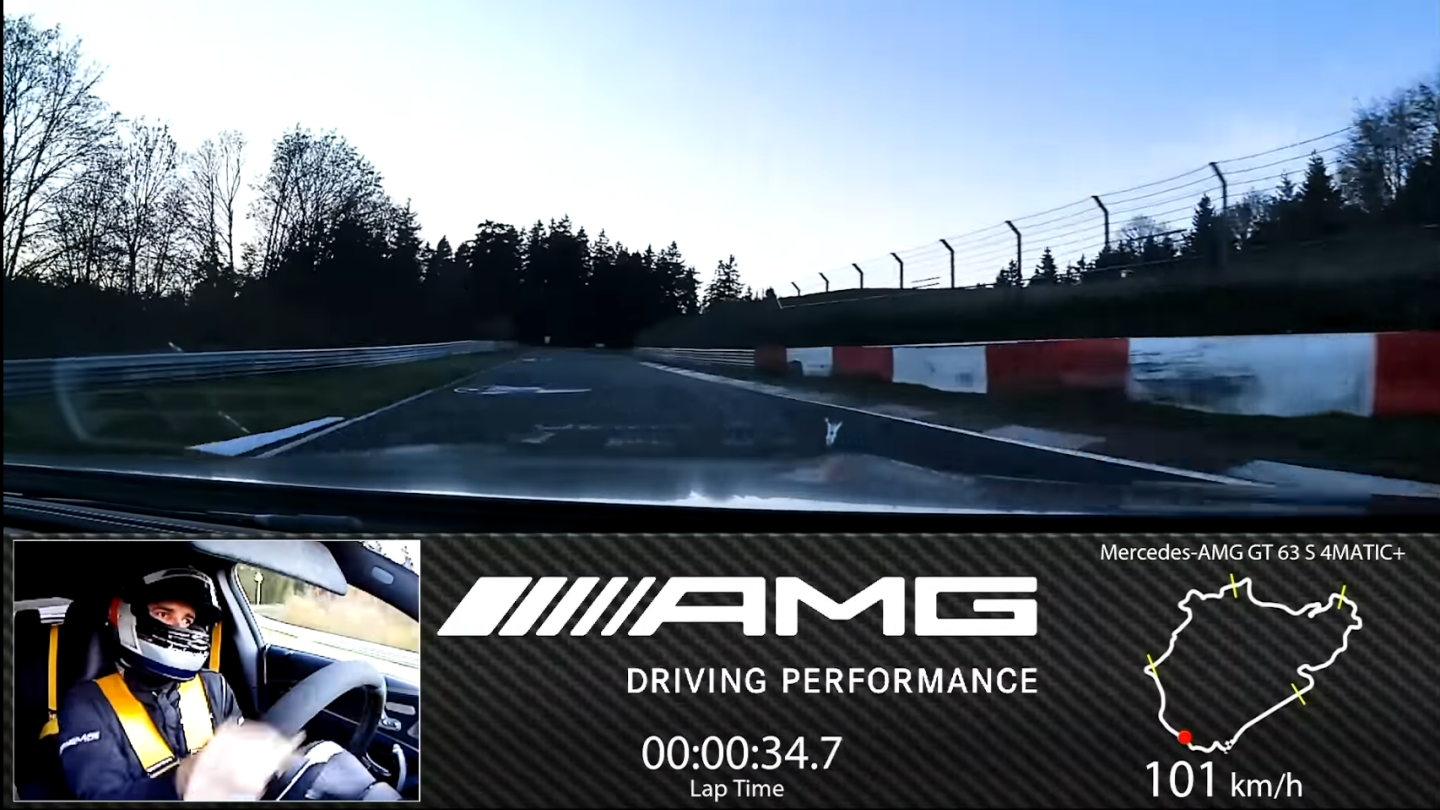 Why there are two differently timed laps on the Nürburgring-Nordschleife

The Nürburgring-Nordschleife is regarded as the most difficult racetrack in the world and is included in every new development by Mercedes-AMG. A record lap is therefore the most demanding test of the qualities of a sports car. The times are determined for two track alternatives – 20.6 and 20.832 kilometres long.

Since 1997, the 20.6-kilometre circuit has been the measure of all things. The specialist magazine sport auto from the Motor Presse Stuttgart publishing house drives this circuit as part of their so-called “Supertest”. For historical reasons, the short straight at the T13 grandstand – from the turnoff from the Nordschleife to the Grand Prix circuit to the exit of the Grand Prix circuit onto the Nordschleife – was not included in the timing. The starting line is therefore at the end of the T13 grandstand in a northerly direction and the finish line is at the beginning of the T13 grandstand in a southerly direction. Therefore, no complete lap is measured after the flying start. The total length of the course is exactly 20.6 kilometres.

In 2019 the official Nürburgring lap was added. It was organised by the operating company “Nürburgring 1927 GmbH & Co. KG” and is 232 metres longer, because the start and finish line are identical here, also on the T13 section, so a full Nordschleife lap of 20.832 kilometres is driven and measured with a flying start.

Numerous conditions must be met for both record times to be recognised: In addition to timekeeping with calibrated photoelectric sensor technology, official record attempts and attempts to achieve a lap time are always accompanied by a notary. In addition to monitoring the timekeeping, the vehicles and the tires are also inspected and approved by the notary. The classification of the vehicle classes is based on the official categories of the German Federal Motor Transport Authority (“Kraftfahrtbundesamt” KBA).

The data at a glance Mercedes-AMG GT 63 S 4MATIC+

* The stated values were determined according to the prescribed measuring method. These are the NEDC CO2 values as defined by Art. 2 No. 1 of the Implementing Regulation (EU) 2017/1153. The fuel consumption values were calculated on the basis of these values. 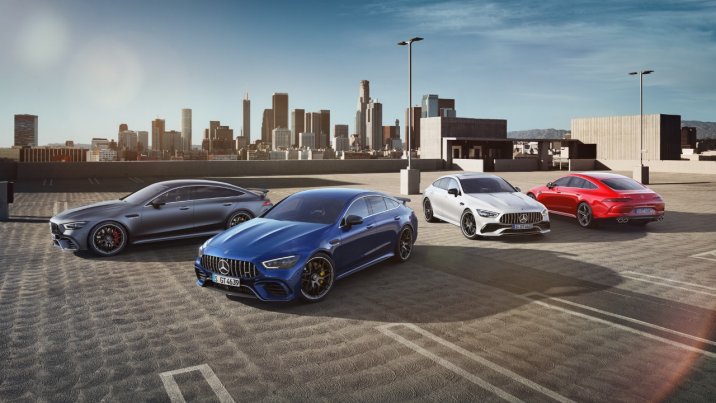 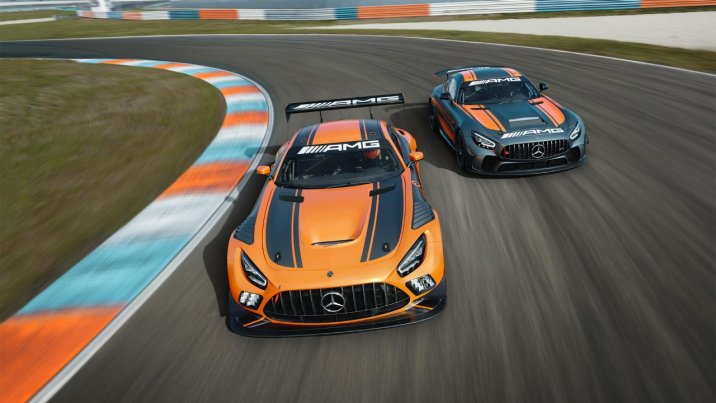 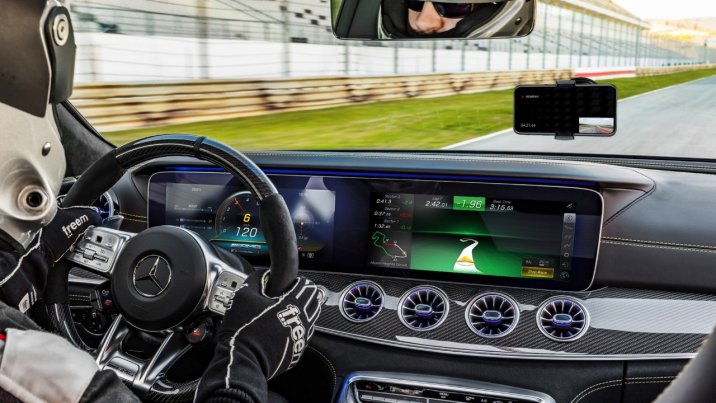